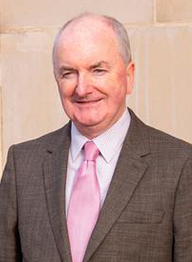 During his 41 years with RTE Tommie Gorman developed a reputation for telling complex stories in an accessible, sensitive way.

He covered national and international events as RTE Northern Western Correspondent, during 12 Brussels-based years and as Belfast-based Northern Editor for the past two decades . His documentaries include programmes on Ireland’s relationship with Britain and about his personal journey as a cancer patient.
His interview with Irish soccer international, Roy Keane, during the Saipan controversy in 2002 was one of the most watched sports interviews in RTE history.

He retired from RTE in April 2021 and currently writes for the website, The Currency.
He lives with his Cork-born wife, Ceara Roche, in Sligo. Their daughter, Moya, works in Brussels and their son, Joe, is based in Boston.