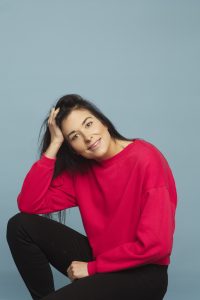 Stefanie Preissner, Munich-born but Mallow-raised is the creator of hit comedy-drama series Can’t Cope, Won’t Cope – the show was originally commissioned by RTÉ in Ireland – however, both seasons have since broadcast on BBC Three and is available on Netflix Worldwide. Stefanie has also produced a series of short documentaries entitled “How To Adult” which she presents for RTÉ’s online platform RTE Player.

Her newly released podcast RTE-SITUATIONSHIPS is enjoying great ratings on the iTunes charts. The show is co-hosted with Stefanie’s best friend Rachel Yoder and each episode looks at a different type of relationship and how to navigate it. Her first feature film script has been commissioned and is supported by Parallel Films the Irish Film Board. Her one-woman theatre show, Solpadeine Is My Boyfriend, enjoyed sell-out runs in Dublin before touring internationally to Bucharest, Edinburgh and Australia, and – as a radio play – it became RTÉ’s most downloaded podcast.

Stefanie graduated from University College Cork with a BA in Drama and Theatre Studies and Spanish. Alongside her career as a screenwriter and playwright, she has won several awards as an actor. She is a regular contributor to Ireland’s Sunday Independent newspaper and her voice is well-recognised from her prolific voiceover career. Her first book Why Can’t Everything Just Stay the Same? was nominated for several awards in 2017 and her second book Can I Say No? is set for release in May 2019.