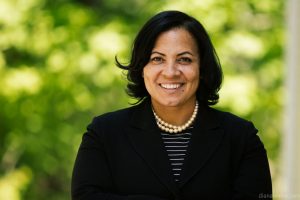 Rachael was born into a large, multi-cultural family. Her parents met shortly after the United States Supreme Court issued its decision in Loving v. Virginia, which invalidated laws prohibiting interracial marriage. At the time, her father had just returned from Vietnam and was living with his family on Ethel Street in Roslindale. Her mother was a nursing student at Boston University. They married and settled on Harlem Street in Dorchester in 1969. Rachael is the oldest of their five children and has a 14 year old daughter. She is also the guardian and custodian of her 5 and 9 year old nieces. She is happiest when she is with family and her dog Cassius She attended Buckingham Browne and Nichols and prior to graduating from high school in 1989, was selected onto an Elite New England School Girls Lacrosse Team and won a National Championship and she received a lacrosse scholarship to attend the University of Massachusetts, Amherst. At the end of her freshman year, three women’s sports teams were eliminated due to budget. Immediately after graduating in 1994, she went to Northeastern University School of Law. While there, she served as the first legal intern in the history of the National Basketball Players Association and interned with United States District Court Judge Robert E. Keeton. After graduating in 1997, she clerked for one year on the Massachusetts Appeals Court and then went to Georgetown University Law Center where she obtained a Masters in Law.

She was accepted into and attended a 6 month intense, Change Management and Leadership program at Harvard Business School. After she graduated from the program at HBS she was ready to take on the world. Tragically, she was then diagnosed with breast cancer. For the next 18+ months, she underwent treatment and multiple surgeries, which led to her becoming completely healthy and cancer free, but that diagnosis deeply impacted her and her family’s life. She now realizes that every day is a gift.

In a public interview with Larry Donnelly, which will set the scene of our subsequent US politics panel, Rachael will talk about her career and her determination as the DA of Suffolk County to change and improve the criminal justice system.