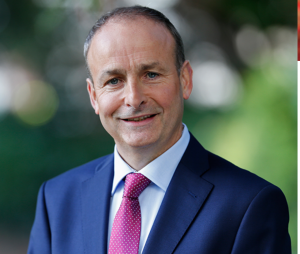 Micheál Martin TD is the current Leader of Fianna Fáil and the Party’s Spokesperson on Northern Ireland.

Deputy Martin was born in Turners Cross, Cork, in 1960 and educated locally, at Scoil Chríost Rí and Coláiste Chríost Rí.  He attended University College Cork where he qualified with a Bachelor of Arts degree.  He then completed his Master of Arts thesis in Political History.

He was first elected to Cork Corporation in 1985 and was subsequently elected as Lord Mayor of Cork in 1992-93.

Since entering national politics in 1989, Deputy Martin has represented the Cork South Central Constituency.  He has served on the Fianna Fáil front bench and in four cabinet posts: Minister for Foreign Affairs (2008-2011), Minister for Enterprise, Trade and Employment (2004-2008), Minister for Health (2000-04) and Minister for Education (1997-2000).

Deputy Martin was elected Uachtarán Fianna Fáil on the 26th of January 2011.