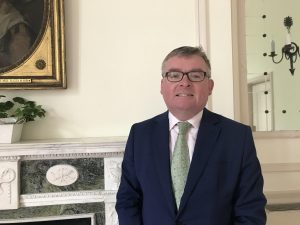 Michael Lonergan is Deputy Chief of Mission at the Embassy of Ireland in Washington DC. Prior to taking up this appointment in August 2015, he served in Dublin with ‘Irish Aid’ as Director for Southern Africa, Palestine and South East Asia.

Born in Limerick he studied law at University College Dublin and joined the Irish Foreign Service in April 1997. His posting include  vice consul in Edinburgh, First Secretary, British-Irish Intergovernmental Secretariat Belfast, Deputy Chief of Mission, Embassy of Ireland, Abuja, Nigeria, Head of Irish Community Affairs, Embassy of Ireland, London,  Press Officer, Department of Foreign Affairs, Dublin and from 2009 to 2013 he  served as Consul General in Boston.

He is married to Kirsty and they have four sons.