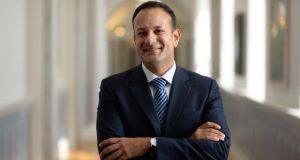 Leo Eric Varadkar is an Irish Fine Gael politician who has been Taoiseach, Minister for Defence and Leader of Fine Gael since June 2017. He has also been Teachta Dála (TD) for Dublin West since 2007.

Varadkar was born in Dublin and studied medicine at Trinity College Dublin. He spent several years as a non-consultant hospital doctor, eventually qualifying as a general practitioner in 2010. In 2004, he joined Fine Gael and became a member of Fingal County Council and later served as Deputy Mayor. He was elected to Dáil Éireann for the first time in 2007. He later served in the Kenny Government, as Minister for Social Protection from 2016 to 2017, Minister for Health from 2014 to 2016 and Minister for Transport, Tourism and Sport from 2011 to 2014.

He is Ireland’s first, and the world’s fourth, openly gay head of government in modern times. He is also the first Taoiseach of Indian heritage.