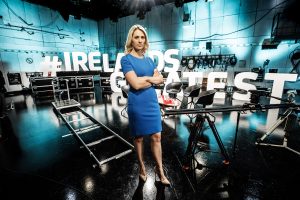 Evanne Ní Chuilinn, from Kilkenny, joined the National Broadcaster RTÉ in 2004.  Since then, she has covered all sports and has worked as both a presenter and reporter on RTÉ’s flagship sports coverage.  Evanne has travelled extensively as a sports journalist, most recently to the 2016 Rio Olympic and Paralympic Games, and the 2017 and 2018 renewals of the European and World Rowing Championships.  She previously worked on TG4’s sports programming and is a fluent Irish speaker.  In 2016, Evanne completed a Masters in Sport Management from UCD and produced a research paper on the topical issue of trust restoration in the governance of elite sport.  She is a proud Mum to Séimí (7) and Peigí (4), and lives in Dublin with her husband Brian.