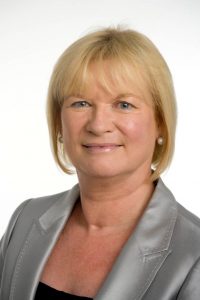 Eileen Dunne began her career with RTE in 1979, as a radio continuity announcer. She joined the Newsroom in 1984 and for more than 30 now, years has worked on most of the major news stories – among them, Queen Elizabeth’s visit to Ireland, General Elections, Dunblane, the talks leading to the Good Friday Agreement and the election and resignation of Pope Benedict XVI.

She has presented a weekly radio programme – The God Slot and music programmes on RTE Lyric FM. For four years up to November 2014, Eileen was International President of the Association of European Journalists, a voluntary pan- European organization for journalists with an interest in European affairs.

A native of Dublin, Eileen is married to the actor Macdara Ó Fátharta and they have one son, Cormac. Her father was Mick Dunne, RTE’s first Gaelic Games correspondent and she has been attending GAA matches around the country since she was a child. Mick was also a fan of all things American and the doings of the Kennedys were a constant feature of Eileen’s childhood.