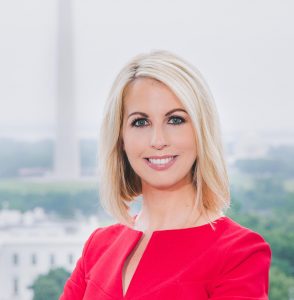 Caitriona Perry is a multi-award-winning Irish journalist who was based in the US for four years as Washington Correspondent for RTE – Ireland’s public service broadcaster. Caitriona returned to Ireland in January 2018 to take up a new role as Anchor and Co-Presenter on RTE’s Six One News. During her tenure in Washington DC, Caitriona reported on several major stories including of course the US Presidential election and inauguration of President Trump for television, radio and online platforms. In 2017 Caitriona published her first book – the best-selling and critically acclaimed ‘In America: Tales from Trump Country’ which documents her first-hand account of witnessing the rise of Donald Trump in America. The book was short-listed for an Irish Book Award for best non-fiction and a new updated paperback edition was released in April 2018.  Prior to the US, Caitriona was based in RTE’s headquarters in Dublin and has reported from across Europe, Australia, Canada and Latin America. Caitriona has a first-class honours degree in Journalism and a Masters Degree in International Relations both awarded by Dublin City University, which named her as one of its Distinguished Alumni in 2015.

Caitriona has won several awards for her journalism, including multiple National Justice Media Awards for her television work and a PPI National Radio Award for her radio news reporting. Caitriona was declared the Irish Media Woman of the Year in 2017 and although she doesn’t Tweet as much as President Trump, in 2018 she was named the most influential Irish female journalist on Twitter. Caitriona is a regular speaker on US politics, the news media and democracy and discourse, and has given lectures in the US, UK and across Europe as well as at home in Ireland. This year she was awarded the Trinity College Dublin Historical Society’s Gold Medal for her contribution to public discourse.