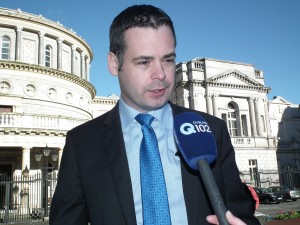 Pearse Doherty is a Sinn Féin TD and the party’s Spokesperson on Finance. He was elected to the Dáil in a by election in the constituency of Donegal South West in November 2010.

Pearse Doherty took a High Court challenge in 2010 over the failure of the last Fianna Fáil-led Government to hold a by election in Donegal South West within in a reasonable timeframe. He won that case forcing the by-election to be held. The judgement in Doherty v. the Government of Ireland ensured that future governments will not be able to unreasonably delay the holding of by elections.

Throughout his time as a Senator Pearse Doherty remained a vocal critic of the Seanad and of the failure of the then Fianna Fáil- led government and previous governments to reform it. As a member of the Seanad he was clear that the Seanad in its current form needs to be abolished because of its elitist nature and the fact that that it had become synonymous with cronyism.