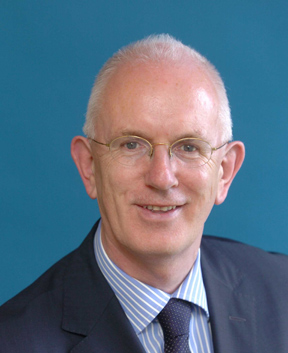 Barry O’Leary was appointed Chief Executive Designate of IDA Ireland in October 2007. He took over the role of CEO from Sean Dorgan on January 1st 2008. Prior to this appointment he was Divisional Manager of the IDA’s LifeSciences and Information and Communications Technology business units. Mr. O’Leary has worked in IDA for over 30 years in most of its business areas including two periods, 1983-1991 and 1995-2002 in Germany, latterly as Director of Europe.

On his return to Germany in 1995 he was responsible for running IDA’s offices in Stuttgart and Düsseldorf which covered Germany, Austria, Switzerland and Italy. He subsequently became Director of Europe and centralised IDA’s German offices into Frankfurt. During this period he was closely associated with winning major projects from companies such as Bertelsmann, SAP, Deutsche Bank, Lufthansa, Kostal, Allianz and a number of key Italian financial services Institutions.

On his return to Ireland in late 2002 Mr. O’Leary was initially appointed Divisional Manager Pharmaceuticals and Biopharmaceuticals and a member of the IDA’s Executive Committee. His responsibilities were increased in 2004 to include the LifeSciences and
Information and Communications Technology areas.

He has been deeply involved in changing the profile and raising the value of Ireland’s
inward investments over the past ten years, focusing on building capability in strategic sectors such as lifesciences and information and communications technology.

Under his leadership in 2010, IDA launched its strategy blueprint, Horizon 2020. The strategy document articulates how IDA will attract the next wave of sophisticated FDI
over the coming decade. It highlights the importance of global mega-trends, economic geopolitical changes and technology roadmaps which will influence where IDA can capitalise on the opportunities that they present.

Barry O’Leary held a number of different positions in industrial companies prior to joining
IDA Ireland, including Nestle and the Smurfit Group. He is a Board Member of Forfás.