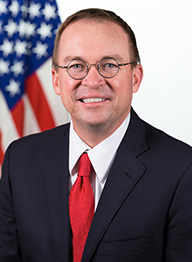 Mick Mulvaney is a proud Irish American and a graduate of Georgetown University and the University of North Carolina at Chapel Hill, where he received a law degree.  He worked as an attorney in private practice and as a real estate developer.  A Republican, Mulvaney won election to the South Carolina House of Representatives and then to the South Carolina State Senate.  In 2010, he was elected to the 112th and to the three succeeding United States Congresses until his resignation in February of 2017.  He served in the administration of President Donald Trump as Director of the Office of Management and Budget from 2017 to 2019, as Acting White House Chief of Staff from 2019 to 2020 and as US Special Envoy for Northern Ireland from 2020 to early 2021.