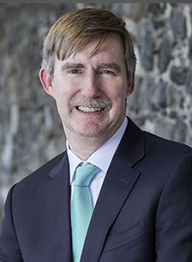 When Ken Murphy announced his retirement with effect from March 2021, after 26 years in office, the Atticus column in the Sunday Times described him as ‘the suave Director General of the Law Society who has long been the public face of the legal profession in Ireland’.

The Law Society of Ireland is the representative, educational and co-regulatory body for the 22,000 solicitors on the Roll in this jurisdiction. On his retirement, Ken Murphy was the longest serving CEO of any national bar or law society in the world.

Throughout his 26 years as Director General, he was the Law Society’s chief spokesperson in the media with which he engaged on an almost daily basis. His has been a well-known voice on the radio on a wide variety of programmes including, as a regular guest for some fifteen years, on RTÉ’s Marian Finucane Show.

Born and raised in Dublin, he completed a degree in English and Philosophy in UCD before qualifying as a solicitor in 1981. He has said in many interviews that if he had not chosen to become a lawyer he would have sought a career in journalism.

Prior to his appointment to the Law Society role in 1995, he practiced in one of Ireland’s largest commercial law firms, A&L Goodbody, where he became a partner in 1990. He practiced primarily in litigation and in EU and competition law including, for four years, in the firm’s Brussels office.

He has served on a number of Government-appointed task forces including those which led to the establishment of the Courts Service and of the Court of Appeal. He has served as President of the world association of chief executives of bars and law societies and is currently a member of the Management Board of the International Bar Association.

In 1991 on his initiative the Law Society established the Justice Media Awards which is now Ireland’s longest continuously existing media awards competition. It recognises excellence in media reporting that increases public understanding of the law, its strengths and shortcomings, and makes awards every year for court reporting, both national and local, in print, broadcast and online mediums.