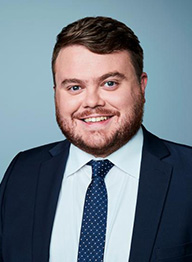 Based in New York City, O’Sullivan is a top expert in his field whose work primarily focuses on the real-world effects of online misinformation and the role it plays in American politics. In the months leading up to the 2020 US Presidential election, he traveled the country reporting on the role conspiracy theories were playing in voters’ attitude to the election and to the country’s response to the Covid-19 pandemic. He also reported live from outside the U.S. Capitol during the insurrection on January, 6th, 2021.

O’Sullivan first joined the network in 2016 as a producer for CNN’s Social Discovery team, before taking on a role as a CNN Business reporter. Over the years, he has worked closely with CNN’s investigative unit tracking and identifying online disinformation campaigns targeting the American electorate, and has reported on how social media platforms, Congress, and the American intelligence community are responding to the threat of disinformation and troll campaigns.

O’Sullivan was also part of the team that uncovered several major Russian government-linked social media campaigns targeting Americans in the run-up to the 2016 U.S. presidential election. His work was later used by Congress investigators and others examining the extent of Russian meddling ahead of the election.

O’Sullivan has been a prominent speaker at numerous national and international conferences, including the Council on Foreign Relations, the Aspen Institute and at a number of cyber security events including DEF CON and the RSA Conference.