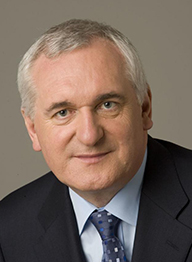 Bertie Ahern retired as Taoiseach (Irish Prime Minister) in May 2008 having enjoyed the unique distinction in modern Irish politics of being the first person in over sixty years to have been elected to that office on three successive occasions.
He served as a member of Dáil Éireann (the Irish Parliament) for almost 35 years. He was first elected to the Dáil (Parliament) in 1977 for the constituency of Dublin-Finglas and he represented Dublin Central from 1981 until 2011.
He was Minister for Labour from March 1987 to November 1991 and was appointed Minister for Finance on three separate occasions from November 1991 to December 1994. Bertie Ahern was first elected Taoiseach in June 1997, he was re-elected in June 2002 and again in May 2007. In 1997 his party was elected to government in coalition with the Progressive Democrats. This minority administration was supported by a small number of Independent members of Parliament. Bertie Ahern received widespread praise for his political skills in ensuring that this administration served its full five year term and delivered on real political and economic progress for the Irish people.
The defining moment of this period and a defining moment in Irish history was the successful negotiation by Bertie Ahern and Tony Blair of the Good Friday Agreement between the British and Irish Governments and the political parties in Northern Ireland in April 1998.
The Good Friday Agreement transformed relations for the better between Ireland and Britain, between Ireland, North and South, and between different traditions within Northern Ireland. It instilled a new ethos of tolerance and respect into politics on the island of Ireland and between diplomatic relationship between the islands of Ireland and Britain.